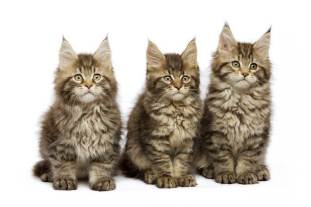 There is one thing I am pretty sure: in shelters, the feline species is, from far, predominant. And I get confirmation of this situation each time I visit one of our shelter partner. This is the reality: but for somebody who is not familiar with the shelter world, you might wonder why this is the way it is! Well, certainly because when it comes down to fertility, cats can be, for sure, quite prolific !

Cats are what we call in veterinary medicine a “polyoestrous species”: they exhibit several heats during the year, and therefore several periods when they have access to reproduction. In theory, a queen could produce up to 3 litters a year. Fortunately this does not happen frequently! In real-life conditions, this number is usually around 1.4. Doesn’t seem much? Well, let’s do the maths here! 1.4 litter per year, with an average of 3 live kittens/litter… with a survival rate of approximately 25% for these kittens in extreme conditions…  With these figures, it is estimated that in a country like the US, there are every year approximately 44 million new kittens…

Therefore, lots of kittens will end up in shelters. What can make the situation even more difficult to manage: the “kitten season”.  To get a better understanding of this phenomenon, let’s go back to the reproductive physiology of the queen.  Cats are said to be “photosensitive”: in terms of reproduction, they respond to the amount of light they will be exposed to on a daily basis.

This mechanism is based on the regulation of an hormone’s secretion: melatonin. Melatonin is secreted during dark periods. To make it short, the more melatonin, the more it inhibits the cat’s reproductive function. That’s why typically in the Northern Hemisphere, cats’ seasons are observed from end of January-beginning of February until the end of September-beginning of October, when the daylight period is longer.

Fig 1: Reproductive season of cats depending on their geographical location

What does this have to do with the “kitten season”? Queens start to be in heats end of January-beginning of February… Gestation lasts a little bit more than two months… That’s why between April and June, we usually observe a peak in kittens’ births. Here is our “kitten season”, and that’s why during these periods, the capacity of care of the shelters can be impacted. Indeed, it becomes hard to manage when you receive new kittens on, often, a daily basis.

Fig 2: Kitten season in shelters in usually obserbed during spring-summer