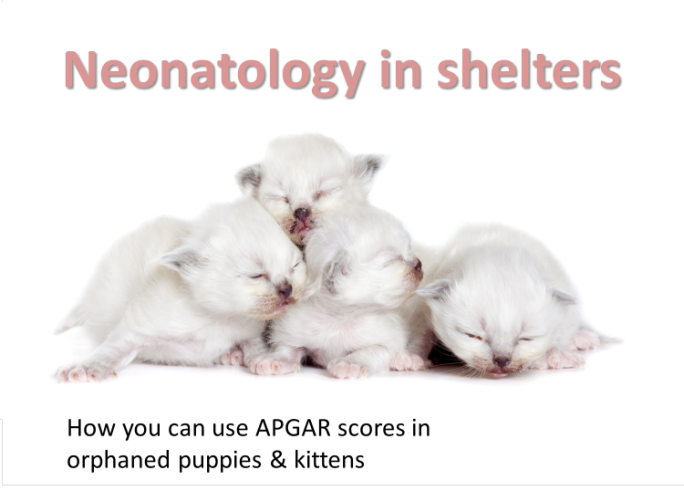 In shelters, you guys know how crucial the clinical exam performed at intake is : this is when you do your initial triage and evaluate the amount of care the animal will need. Based on what you observe you will then decide if it needs to go to isolation, quarantine, or move faster inside your structure. This is important for adult dogs and cats. It is also the case for orphaned puppies & kittens.

However, it might get trickier here. Indeed, we usually have a good idea regarding how to evaluate the health of adult pets. We know what clinical signs to look for, what they mean, etc. But we sometimes tend to assume that newborn puppies & kittens are just “smaller” version of these adults. And this is a mistake. In fact, the vital signs are usually totally different from what can be seen in adults. Kitten season is around the corner and some of our shelter partners already tell me that they see orphaned kittens flocking to their structures. As usual, it is important to be prepared. That’s where the APGAR scores can help.

A tool developed for human neonates…

In the field of neonatology, there are figures that must be known because of the huge contribution they brought. Virginia Apgar (1909-1974) is one of these giants, and her work is something that profoundly changed the way we approach neonatology. Virginia Apgar was an American obstetrical anesthesiologist. She was a leader in the fields of anesthesiology and teratology, and introduced obstetrical considerations to the established field of neonatology. To the public, however, she is best known as the inventor of the Apgar score, a way to quickly assess the health of newborn children immediately after birth.

The Apgar scale is determined by evaluating the newborn baby on five simple criteria on a scale from zero to two, then summing up the five values thus obtained. The resulting Apgar score ranges from zero to 10. The five criteria are summarized using words chosen to form a backronym (as you can see on the slide above):

–          Appearance: refers to the natural color, texture, and appearance of the skin , especially that of the face;

–          Grimace: = reflex irritability; a reflex action is an involuntary and nearly instantaneous movement in response to a stimulus;

… that has been adapted to veterinary medicine

The Apgar scores are routinely used in human maternities, but if I mention them in this blog post, it is simply because they have also been adapted to veterinary medicine for our companion animals.